Why I Love South Carolina 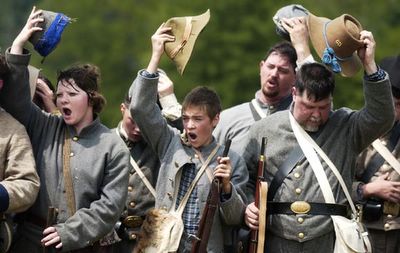 Nothing like laughing at the ignorance of Southerners to make you feel better about yourself. Some guys down the street are shooting firecrackers and what sound like air rifles, so I thought this blog would be appropriate.

The picture above was taken from a recent article published in The Greenville News about The Battle of Central, a Civil War battle that took place several miles outside of Clemson, SC in the the town of Central. The war ended April 9, 1865 but, much to the delight of these fellers here, was re-enacted last weekend. Some highlights from the article, taken directly from the website:

-"We try to do it as historically correct — not politically correct — as possible," organizer Jim Bay said...Bay said the South won Saturday's make-believe battle, while the North had its chance on Sunday. But a group of Confederate soldiers insisted that both sides withdrew from Sunday's fight. "The Confederacy don't ever give up," said Chuck Volner, an Alabama attorney who wore gray on the battlefield.

-Spectators' digital cameras beeped as the re-enactors did their best to show the war in all its gory detail. Canons echoed off the hills. Confederate soldiers collapsed as they rushed up a hill. Details mattered. Medical tents had piles of rubber limbs and were infested with rubber rats. "That's reality," said Doc Halliday, who played a naval surgeon covered in fake blood. "And you know what? The kids love it."

-The main event was on a grassy hill about the size of four football fields. Jim Tankersley, a retired elementary school principal, has opened the farm off State 93 to the re-enactors for 11 years and plans to make it 12.
He doesn't believe in slavery but has a firm belief the South was fighting for freedom. "It's been handed down to us from generation to generation," said Tankersley, who said he has 50 ancestors who were Confederate soldiers.

Does this amuse/disturb you as much as it does me? And check out this gem I found on under "additional pictures":

I'm surprised Hank Williams, Jr., wasn't airlifted to entertain the troops during the battle. You can't have a Civil War re-enactment without a little Bocephus.