Discovery Channel is doing a series called "Greatest American". In it, viewers are allowed to vote for who their picks. Lists of the Top 100 and the Top 25 have already been selected by viewers. Included within the Top 100 are such "Great Americans" as Condeleeza Rice, Dr. Phil, Brett Favre, Barack Obama, Barbara Bush AND Laura Bush...the list goes on. Not to belittle any of these wonderfully imporant and influential people, but this is a list of greatest Americans EVER--as in in the entire 200+ years of this country. What has Dr. Phil done to deserve this? Apparently more than James Madison, founding father and 4th president. More than Hemingway or Bob Dylan or any visual artists... And apparently being married to a Bush that is president is enough qualification to be a "great" American.

Also: what do Richard Nixon and Michael Jackson have in common? If you answered doing illegal things and being in the Top 100, you'd be correct.

In the Top 25 are expected greats like FDR, Lincoln, Washington, Jefferson, MLK Jr., Edison and Einstein, but also more shocking ones like Oprah Winfrey, Bill Clinton and George W. This really reaffirms my faith in the America TV viewer.

The voting for the Top 5 is June 19th. Any predictions on these or the winner? I predict FDR, MLK, Washington, Lincoln and Dubya in the Top 5, with the G-dub winning, because at this time, absolutely nothing would surprise me. It's wartime, as these idiots will I'm sure say, and you have to support your president. 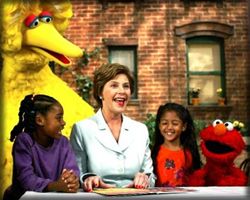 Interesting post. Although I agree with you about Dubya (and Laura for that matter), I have to disagree about Oprah. Yeah, yeah. Maybe I am just playing the "woman card" here, but anyone who has the power and money that she has and uses that power and money to better people's lives while increasing awareness of social ills and successfully encouraging Americans to reach out to AIDS victims in Africa definitely has my vote.
-Caroline

Hmm...I could be wrong about her.

Plus, Oprah has in the past two years named Steinbeck's "East of Eden" and a collection of three Faulkner novellas as part of her club.

Sure, they're no "The Lovely Bones" or "The Astronaut's Life," but they're not too bad, all considering.

Looks like Laura took some time off from her duties as "Presidential Doormat" to appear with the lobotomized half-children, half-zombie inhabitants who call Sesame Street "home for sexual predators". No doubt to talk about how right we were to bomb the hell out of Shiny-Time Station and their weapons of mass destruction