Some of What I've Been Up To Lately 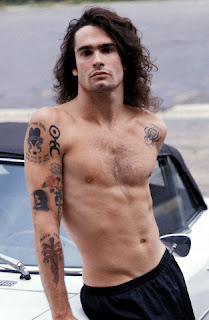 My story "Your Mother and Henry Rollins," published in lovely Beecher's Magazine No. 1, was discussed by Nathan Huffstutter on HTMLGIANT. (Feel free to leave a comment up there, by the way--the post looks kind of lonely.)

The story, says Huffstutter, is "not at all about Hank R." and "only somewhat about a mother." And he's right.

The piece isn't super long, but here's a bit of insight from Huffstutter that I liked:

(If you are interested, I would be happy to send along a Word document of the story itself.)

I had a conversation over beer with Vol. 1 Brooklyn's Jason Diamond for Impose Magazine about the new Real Estate album. (The album is really good, by the way.)


Jason: I know this sounds corny, but I would like to put the first two Real Estate records on my iPod and just walk around New Jersey.

James: People assure me that there are a lot of nice gardens to walk around.

Jason: I always wondered if the Garden State thing was bullshit. I also don’t want to get ahead of ourselves, but there’s a song called “Wonder Years” on here. That makes me feel pretty good.

James: Was that set in New Jersey?

*Jason had a lot of good lines during the conversation--way more than I did--but here is one part that requires refutation. From The Wonder Years Wikipedia page:


The series depicts the social and family life of a boy in a typical American suburb from 1968 to 1973, covering his ages of 12 through 17. The suburb's name and location are never specified but different elements overwhelmingly suggest that the setting is California. In the first episode the Arnolds attend the funeral of Winnie's brother Brian Cooper at Golden Gate National Cemetary, in San Bruno, CA. In one episode, Kevin displays his driver's license issued by the "State of California."

The killer first single from the album, "It's Real":

I signed the Occupy Writers petition.

I did two readings, one at the Center for Fiction in Midtown, the other at a smallish bar in Bushwick called Goodbye Blue Monday, where I once played bass back in, I think, 2008 or 9.

The readings seemed to get positive responses.

I should include that, on my way to the Bushwick reading, I spilled off my bike and landed awkwardly on my knee and wrist.

Here is me with the DIY splint I constructed around approximately 5am (which was when I finally got home from the reading [and the DJ set I had to do after]): 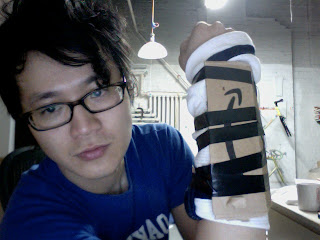 (The cloth you see is old tube socks; the cut-up cardboard box is, shamefully, from Amazon.)

Here is me with the "professional" splint I later obtained, wrapped/constructed by my doctor friend/former college roommate Evan: 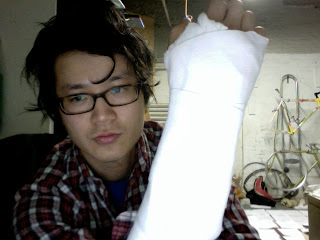 Meanwhile, I'm laying low for the indeterminate future. Reading a book a night. Last night was The Lover by Marguerite Duras, the last page of which killed me. (I don't think it gets much better ending with a phone call.) The night before was The Time Machine by H. G. Wells, while also completing the last 200 pages or so of Bolano's behemoth 2666, one of the best books I've probably ever read. So beautiful and giant. Today I wanted to read Jakob Von Gunten by Robert Walser (or Selected Stories), but the library I went to didn't have either. I sit here, at this desk in Midtown Manhattan, where there are other people ostensibly writing things all around me. I walk outside and it's surprisingly cold. I realize I am underdressed. I think to myself, at least my wrist is getting better. The split is off.
at 7:05 PM

Lonely post indeed - I'm not sure exactly what it means to have "negative one" comments, but it can't possibly be a good thing. Haha - oh well. I appreciate you reading the post and giving a generous shout-out. I was trying to collage some of the same concepts from the Frank O'Hara quote you posted today, while also leaving multiple entry points for people to jump in and discuss the Beecher's issue. Thud. Anyway, kudos on the story and your inclusion - it's a beautiful issue and I hope the LMC commentary starts to rev up as the month moves forward.

No, Nathan--thank you! It's a shame more people didn't speak up, but I enjoyed thinking about your post quite a lot. Thanks again for reading.