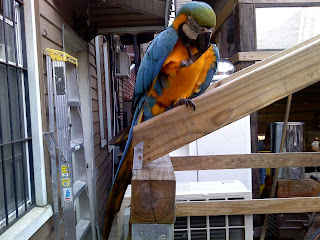 Today, at the coffee shop, a woman came in with this on her shoulder. A handful of people went over and took pictures of it. Some of these people wiggled their fingers around to try to get its attention. At one point, the woman fed it a grub or something. Whatever it was was dark gray and about the size of a finger. Actually, thinking about it, I 'm not sure if she fed it, or if it was just rolling its tongue around, or maybe coughing up some feathers (there was some white fluffy stuff that came out of its mouth). When she went to the bathroom, she placed it on the gate. When she came back from the bathroom, she bent over and kissed it on its wing and made a small quacking noise. Somebody said its name was "Morgan."

UPDATE (8:04pm): Turns out, the dark gray finger thing was, in fact, its tongue. After all that with the parrot, I stepped outside to use the phone. As I was talking a short, pudgy Asian guy wearing a leather vest and no undershirt (as well as a feathery hat and dangling earrings) squatted on the sidewalk and started vomiting a small orange puddle of liquid. Later he came into the garden area too, although for some reason he didn't sit down, he just looked around and then went back inside.
at 6:02 PM

Email ThisBlogThis!Share to TwitterShare to FacebookShare to Pinterest
Labels: birds in coffee shops