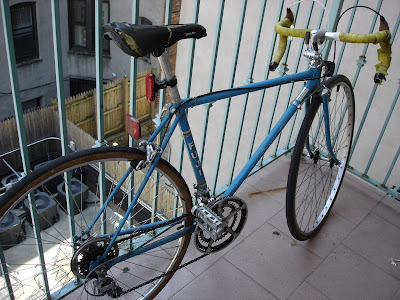 Last year, in an effort to save money, time, and the environment, as well as to get in better shape, I did something I called "The Bike Experiment." Here are the fifteen posts I wrote about it.
In total, I rode ~1018 miles in New York City over a span of 98 days, beginning with a ride out to Fort Tilden Park on June 15, to catch a free Todd P festival and ending sometime in September, with some anonymous ride to somewhere I can't remember--probably the subway station.
I made it my goal to go for 1000 miles and, despite the occasional breakdown, crash, or bout of subway laziness, I worked toward that goal.
This year, I will be participating again in what I will be calling "Bike Experiment 2010." Bike Experiment 2010's goal: 2010 miles.
Last Wednesday my month unlimited MetroCard ran out. Coupled with the suddenly beautiful, warm weather, it's as good a reason as any to start.
Each day, I will attempt to document the salient, at least to me, information, including:
-how many miles I travel (calculated by Google Maps' new "Bicycling" feature)
-how many boroughs I travel through
-how many bridges I cross
-how many subway trips I take
-what the weather is like
-what I was wearing
As trivial as they may sound initially, the last two bits are important because they affect my ride just as much as where I'm going. I thought it might be interesting to document that information as well, for potential statistical analysis.
Updates forthcoming regularly. 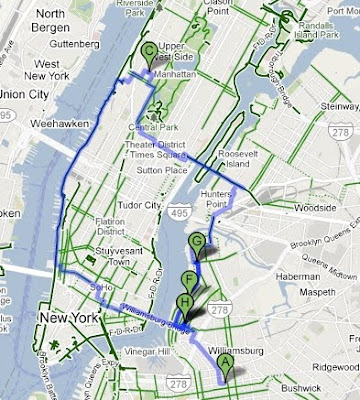 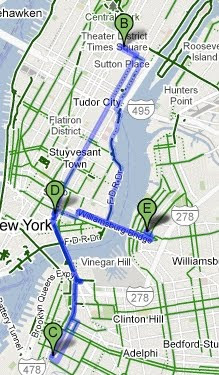 
4 bridges (williamsburg 2x, manhattan 2x)
0 subway trips
very sunny, slightly warmer
wore gray "wifebeater," black jeans
A note: don't ride the greenway that runs along the FDR, at least not above Delancey or so, unless you like unclear signs, having to switch over from sidewalk to parking lot to cobblestones and police officers in training, running laps as a guy on a bike barks out times to them, "6:32...6:33...7 minutes, pick it up..."


Between Midtown and Carroll Gardens, I took a moment to sit on a bench and look out at the East River. Next to me, a Chinese man was eating a tangerine. When I got to Carroll Gardens, I realized I had forgotten my lock back on the bench. I tried to bring my bike in with me, but bikes weren't allowed in the school I was at, and the two female security guards looked at me in alternating waves of suspicion, pity and hatefulness. I could tell I wasn't going to be able to talk them into letting me take it in, so I took my bike back outside. I leaned it against a fence where other bikes were leaned and, to make my bike less portable and desirable-looking, removed my front wheel and bike seat and carried them with me back inside the school. The younger security guard laughed when she saw me with my wheel and seat in my hands. I went off to teach the kids, worried about my bike.
When I returned, I was enormously relieved to find my bike, still there, leaning against the fence. Not only that, but when I returned to the bench along the East River, my bike lock was still there, after all this time. Three hours had passed. I made a celebratory noise and the guy who was now sitting at the bench looked over at me disinterestedly. He had four or five fishing reels set up and he tended to those instead and I did not make any more effort to tell him about my good future.

I should also mention that I was called an "asshole" this morning by a cab driver, for cutting across traffic in a dangerous and careless way. Then a few hours later I was called a "good guy" by a random older Indian dude in the park, for picking up my discarded orange peels and throwing them in the trash.
at 1:00 PM