Some links for you and a response from Ross Kaminsky

Because I've only got a certain amount of words to write a day and I've been using those up on creative -- i.e. "useless" -- endeavors, a bunch of gathered material for you: 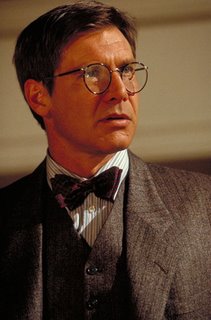 Funny: Indiana Jones and his quest for tenure

And a response to my previous open letter:

Thanks for the note.

I'd probably be angry too if I grew up in South Carolina.

I agree that there is a lot of intolerance in the South, including among narrow-minded redneck conservatives.

But in the more intellectual parts of the country, I absolutely maintain my assertion that it is the liberals who have become the intolerant ones, with the exception of the extreme religious right, whom I have no use for either.

My problem with Columbia is not that there are a few insane radicals there, but rather that the administrations of the school have for 20 years, if not 40, been simply spineless in the face of unacceptable student behavior. Political correctness is completely out of control at Columbia and other similar places. These are people who believe there is no such thing as right and wrong, and I think they are not just annoying but dangerous.

I very strongly disagree with your implication that recent events do not reflect on Columbia in a larger way. They surely do, and Columbia would not give the protesters anything other than the mildest slap on the wrist without the pressure of knowing that at least some part of the world is watching their reaction.

And why should we give Columbia the benefit of the doubt? It's a school which has historically had a big Jewish student population, including me and my father before me, yet hires Edward Said and supports rampant anti-semitism in their academic departments. It's a school which I believe teaches students that everything which made America great is wrong.

I have no use for Columbia, and I hope the Minuteman representative sues the school and wins (for the school's security guards simply standing aside as the protesters were rushing the stage.)

I hope you keep reading my blog and commenting.

You are so welcome for the link. I wanted to cry when I watched that video.

I did not, however, want to run out and read your friend Cormac.

Like my friend Kevin previously posted how can you like Cormac without liking Hemingway (and vice versa)?

Begrudingly I have to agree with him a bit on this.

Eh. Lions are cool but southern gothic is cooler. Plus Cormac is funny, if you happen to find grotesque, desolated characters who exist in grotesque, desolated worlds where those troublesome conventions like morality and ethics are often flipped 180 degrees amusing. Which I do.

Cormac isn't a man? And Hemingway is? Have you read "A Farewell to Arms?"