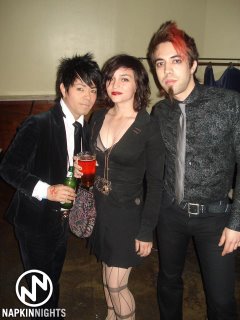 Complaining is what I do (I have a blog after all), but right now, knock on wood, I don't really have much to complain about. Which is good.

Last night I went to see Elephone, Hybrid Kid's bass player's other (and currently more successful) project, at their CD Release Party. The party was at a club called Popscene and I was warned by several sources that it was exorbitantly "sceney" and full of hipster kids trying too hard and dancing in ways that would make black people cringe. Needless to say I fit right in and loved it. A big part of the bar's decor consisted of kitschy video projections played onto the various walls. The two most memorable ones for me were a LaToya Jackson workout video and a Morrissey music video DVD (with subtitles "on"). It was an amusing touch, and while the crowd was a little young (18+ show always do this), there was definitely a high "cool hair" quotient, and dammit, it felt pretty cool to be hanging out with large numbers of beautiful, fashionable, alternative people in a beautiful, fashionable, and alternative bar.

I even won a prize in a drawing--something that's never happened to me before. It happened like this: Before the show I spent around an hour holding a drink by myself just standing there watching everyone else trying not to look too awkward, while I waited for my friends J and T to arrive. The trick to looking like you actually do have friends and are not just there by yourself is to move around. A nice touch is to go talk to people whose job it is to talk back. Like the merch and radio station booths. The merch booth was sort of lame--the girl working there was entirely unrespondant to the joke I made about the girl on the dancefloor doing something that looked suspiciously like the "Charleston"--but the radio station was having a drawing for some outdoor concert called BFD. I'm not particularly keen on festivals. (I'm a hipster, remember--a hipster and an ex-hippie.) But the bill included Echo and The Bunnymen, Franz Ferdinand, The Strokes, Yeah Yeah Yeahs, and Panic! at the Disco--all bands I'm supposed to like, or better yet, be able to state why others do and yet I don't. "Why don't you sign up and enter to win," the girl behind the booth asked me. Why not, I thought to myself. I had nothing to lose, save for a SPAM-less email account. So I filled it out, folded it once loosely, and put it in the clear drawing box. I grabbed the complimentary lighter (but not the shot glass--it was plastic--how cheap is that?) and headed back out to the main room to go be awkward again.

Around fifteen minutes later there was announcement that the ticket drawing was being held. After a sufficient time had passed as to appear indifferent to the result, I wandered to the booth to see what loser had won. Turns out that loser was me.

The actual events leading up the to winning were more dramatic than that, of course, but it really doesn't transfer well into words. Basically I just had a preminition about halfway into the drawing, while the girl had her hand in the box and was feeling around "blindly" while looking upward, that I was going to win, simply because my entry was the most ergonomic one. I'd never won anything before, let alone knew I would win before winning, and so it felt nice. I felt validated, in some strange way. I don't know why. 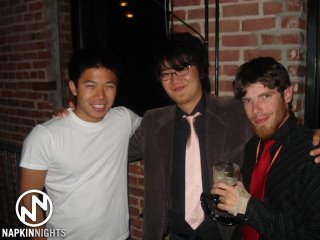 These two random guys evidently thought so. This was the "BEFORE" picture, of course. The "AFTER" one is in the "Members Only" section.

And no, there was not a sign outside the front door that said "black shirt and neckties required". It just looks like there was.
at 6:02 PM

You're obviously insecure in your tight-ass hipster jeans and identity. Otherwise, you wouldn't be making so many frickin' posts about it.

P.S. You're so vain, I'll bet you think this comment is about you.
Haha! Chew on that.

I thought you might be interesteread in this job when I saw it. I know you don't live in L.A. but you're the only fucking person I know who is at least close, and at least funny. You'll have to pay the website if you want the contact details, however.

I think you could do it Yeh. Just lie and say you live in L.A.

Oh, you're off to study in the East, aren't you?

NOTE: Due to location, only Los Angeles based writers may submit.

I am looking for a head writer for a new Internet-based TV show.
Specifically, I am looking for writing samples that reflect skill in
topical and observational comedy (like The Daily Show, except about dating).
In order to submit, you must live in Los Angeles.

The show I'm developing is a topical satire show; you'll be writing and
crafting material for a ½-hour single-host comedy talk show dealing
with relationships and dating. This is not a full-time position.
Beginning pay is minimal, but ratings growth means more pay. Must be located
in the Los Angeles area.

This is a non-WGA writing assignment. Please respond with a humorous
essay, some jokes,
or a writing sample that is NOT a sitcom or a feature script, along
with your availability and resume.

Please Note:
Must be located in Los Angeles
This is a very low-paying opportunity
This is a part-time position
The show is not (yet) on TV
Please do not submit sitcom or feature scripts as a writing sample.

For more information on gaining access to this lead, please see
http://www.InkTip.com/pnews.php.

p.s. Angel (AKA Captain Ahab) secretly fancies you and those tight-ass hipsters.

Angel, your hostility shows nothing more than you having an elementary school crush on me. It's okay that our relationship hasn't progressed past that. [taps you on the right shoulder, while standing to your left]

By the way, Angel, I had Spotted Dick last night at a party. Heinz, that bastion of Americanism, actually makes some. Apparently "Spotted Dick" is British for "Sponge Pudding".

Light, that looks great, but the repeated "MUST LIVE IN LA AREA" frightens me. If I submitted and they found out I was lying, I think they might hurt me.

And yes, I am moving back to the East Coast, around mid-July.

Spotted Dick is definitely not sponge pudding. 'Pudding' as you know it is not what it seems to be in England. I had Yorkshire pudding yesterday with my Sunday Roast, and it looks like an onion ring, only it's spongy and tastes of bread. And, it's not even sweet.

As for the Carolina Cup picture, is that Amy's friend Ashley Roe, second on the right? I think i recognize that dress... weird and creepy, i know.

Angel, yes it is. And yes, that is creepy. Her dress is OK, I guess, but the guy on the right is mostly why I used the pic.

And when I say "creepy", I mean eerily perceptive. You'd make a great stalker.

Hhmmm, you cause me to be jealous of your interesting surroundings. And by interesting I mean, "Not interested in watching the OC and listening to Velvet Revolver". So obviously, I am hurting from a lack of hipster proximity.

I've heard Portland's ever hipper. What do you know?

Oh, and congrats on winning the ticket. You didn't have a premonition. You MADE it happen. With your brains. And brains like that should be eaten by zombies.

So, Jenn, I'm more interesting than the OC or listening to Velvet Revolver? Thanks--I think.

I have a friend who's in Portland as we speak. I'll have to ask her. Portland is the home to M. Ward and your favorite, The Decemberists. Take that for what you will.

I think I'm going to probably sell that ticket on Craigslist and use that money to go on a club crawl (am I the first to use that term?)

No, your (human) surroundings are more interesting than mine (who are interested in Velvet Revolver and the OC).