You need a reason to live; I have one to drink, or: A celebration of St. Patrick's Day 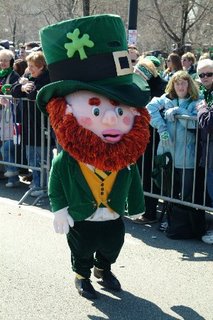 Apologies for the lack of updating. In the span of a week or so I’ve managed to do quite a few notable things, the least of which include a) getting sick from food poisoning, b) shopping well beyond my means, c) getting reprimanded at work, d) acting ridiculously and inexcusably selfish, and e) starting and subsequently ruining a budding friendship/relationship with a wonderfully talented and promising person--female mind you, I'm not eff-ing gay! Sure I may shop in the Castro (like I did the past weekend); sure I may make jokes about myself on and offline (like I did at The Morning News). But in all seriousness, I'm straighter than an arrow and less homoerotic than a frat-initiation hazing. Honest!

Anyways, what I was trying to say before that digression was that these recent setbacks would have been fine with me (another shining example of my selfishness) had they led to some sort of creative outburst, a splurge of writing, music, or both. But unless you count this post (which I don’t) as an example of artistic productivity, I have nothing to show other than a really sick feeling the last two days, additional gray hairs, and a couple new sexual neuroses—this last bit is hypothetical; I haven’t checked yet.

Fitting that today is St. Patrick’s Day, a day where alcoholism is the norm and sobriety is the strange. With alcoholism comes awareness, which begets depression, which begets alcoholism. It’s a vicious cycle.

You see, to us here at Yellow Redneck Blues (and much of the rest of the blog community--I can't believe I just said "blog community"), holidays are seen merely as "days to bitch and moan about the stupidity of others, while still feverishly and hopelessly wishing to join them."

So here’s to drinking pint glasses full of green beer and tolerating foolish requests of “Kiss me, I’m Irish!” yelled by drunken buffoons and air-headed women. To plates of tasty corned beef and cabbage and kitchens that reek of something awful. To parades dedicated to someone you don't really know anything about, other than they liked green. A lot.

A toast to you, St. Patrick, patron saint of drinking, tomfoolery, and the like. You can find me sitting in the dimly-lit corner booth unhappily counting the time until when I can be alone and unhappy, which is to say happily alone. Barkeep, another!
at 5:34 PM

Had that happened I wouldn't be able to look myself in the mirror. At least not admiringly.