Here's a post-Turkey Day report on the days happenings:

While at the dinner table, ate something truly revolting that made me want to immediately vomit. I should have known better; when you don't know the name of something or what's in it (meat maybe? a dark greenish vegetable, not unlike seaweed?) and you combine that information (or rather lack thereof) with the fact that the food was a dull brownish-green hue - the same color generally used in movies for zombies and undead - you should probably not attempt to eat said food product. Then I tried to wash said revolting biteful down by drinking wine which must have been left out by the beach before being sold. Seriously, the combination of offending flavors made me have to cough it out into a napkin.

This situation reminded me of the whole carry-food-in-your-mouth-without-swallowing-and-then-pretend-to-go-to-the-toilet-and-then-spit-it-out method I'd perfected when I was eight and my mom left the country leaving me alone to subsist on my father's cooking. I don't remember much about the food other than the frozen lima beans he heated and reheated as dinner. Four nights in a row.

After dinner, my sister called from her new residence in Houston to wish me a happy turkey day. A lengthy conversation to catch up on one another's lives ensued, the highlight being when she told me this: "You're like how my friends and I were at your age. You're like a 23 year-old girl." Thanks, sis. Love you too.

But don't get me wrong; my first Thanksgiving in San Francisco was quite an entertaining one. The Charlie Brown Thanksgiving Special was on and my cousins and I watched it joyously. These are the things that I noticed that I would not have noticed as a kid:

I call it "Things I noticed this year on The Charlie Brown Thanksgiving Special which would have gone unnoticed when I was a kid":

2) Peppermint Patty (to be referred to as "PP" from now on) and bifocaled Marcie are either A) a lesbian couple or B) a heterosexual couple. A couple though, that much is clear.

While most of you might say it's A, no contest, may I submit this to you, ladies and gentlemen of the jury? Fact: Marcie always calls PP "Sir". While it is almost certain that it is because she is the "sub" and PP is the "dom", could it not be equally conceivable that it is because PP is actually a transvestite and Marcie is not so subtly hinting at this fact, while at the same time (because they are a couple), still maintaining a respectful and lady-like manner for herself?

3) The show is far ahead of its time in its promotion of social equality and alternative lifestyle representation. Kind of like a Star Trek for kids. Consider these examples: the aforementioned ambigiuosly homosexual couple PP and Marcie; Franklin, who is, let's face it, basically just a black version of Charlie Brown; Lucy, the empowered female; Pig Pen, the dirty poor kid with a heart of gold. And where does Snoopy fit into this veritible United Nations of Childhood Idyllism?

Ever notice those little slanty upturned eyes he gets whenever he's happy or dancing or thinking?

That's right, Snoopy, is one of "us", and by "us", I mean "mostly mine" since I am Asian and the majority of you reading this are not. Snoopy is the loyal and sage wiseman figure to Charlie, constantly giving examples of enlightenment through enjoying life's simpler pleasures; things like popping your own popcorn, ice hockey, and a somewhat one-sided friendship a little yellow bird. (OK, so those are rather poor examples of things Asians do, but it's not like he helps Charlie Brown with his homework or buying a computer or something.) 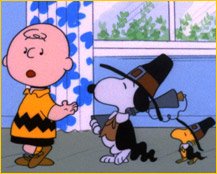 Guess who gets to play Indian? If you said Franklin, you'd be wrong, not to mention racist. Because of number...

4) In a shrewd and politically correct move on the part of Peanuts creator Charles Schultz, while Snoopy and Woodstock dress up as pilgirms with muskets and funny hats, none of the other characters don headdresses or loincloths. Imagine the hiliarity that would have ensued had Franklin been cast as the "noble savage".

FRANKLIN, in war feathers, carrying spear, speaking to SNOOPY: "You're a dog and you get treated better than me."

5) Though perhaps darkly comical and mildly amusing, The Charlie Brown Thanksgiving Special is best viewed by children rather than overly analytical twenty-somethings (i.e. me) who try to read hidden socio-political agendas and meanings into everything.
at 12:47 AM

You failed to pick up on the subtle insertion of quasi-Christian ethics...or is that the Christmas special? Or the one with "The Great Pumpkin"?

Anyway, it's in there...I just know it

We used to chug our milk and then spit unwanted food into the carton while pretending to take a sip. Only student with clean plates could go back for seconds. Damn them for serving spinach on pizza day!

You are spot-on with the racial stuff in Peanuts. I fell asleep watching the only local chanel I get (CBS) and late-night it is UPN...god THAT sucked! No clue what the shows were called, or even if they were different shows....but it sucked.
But you're post didn't suck...so that's good.

If I'm not mistaken Peppermint Patty asked "Chuck" to save her the neck from the turkey she was expecting him to prepare. That's pretty odd. I haven't watched the show in a few years so I'm not 100% certain it was this one, but I can't imagine another Charlie Brown special where there's even an opportunity for a comment like that. Time to pull out the ol' DVD set.

Amichai: I don't really know how to respond to those comics. I guess they're creative, original, and provocative. But not exactly funny, persay. Let me put this another way: when I think of the word "funny", something I don't think of is a homeless and naked grown-up Chuck peeing on the street. Although, in some strange way, describing that was kind of funny, so maybe I'm wrong.

Hitman: that's a good trick. It'd probably work too if my dad allowed drinking from the milk carton. First we'd have to buy milk that comes in cartons, though.

Glom: Yeah, I was confused by that, too.